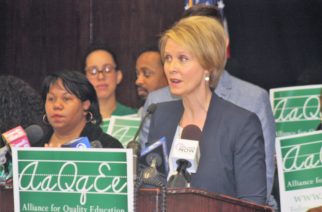 In her first appearance in the Capital since announcing her campaign, gubernatorial-hopeful Cynthia Nixon took the opportunity to bash Gov. Andrew Cuomo on “legalized bribery and corruption,” and the values that the “old boys’ club” will be “upholding in [the governor’s] mansion” ahead of the budget vote. In a half-hour […] 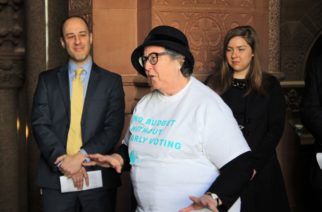 With the passage of the 2018-2019 FY Budget fast approaching, watchdog groups are calling for the governor to pass a measure to make business subsidies transparent. Both the Senate and the Assembly have included in their budget bills (S.7508-b, A.9508-b) proposals for the creation of a searchable database that will […] 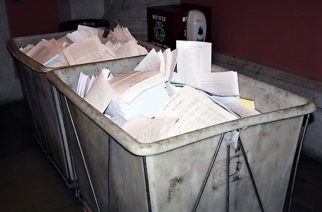 The Senate passed a new bill this week that would further digitize legislative and state agency paperwork, potentially saving taxpayers millions of dollars while supporting the environment. The bill (S.4149-a) would implement the “Legislative Online Paperwork Reduction Act,” with the goal of ending unnecessary printing by making bills, reports, audits […] 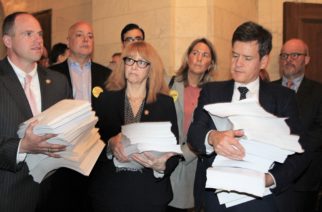 More than 130,000 petitions in support of CVA delivered to Senate Republicans

Sen. Brad Hoylman, Assemblywoman Linda Rosenthal, and Sen. Timothy Kennedy, delivered 132,533 signatures to Senate Majority Leader John Flanagan’s office in support of the Child Victims Act, which is reportedly a sticking point to a final budget due this week. Child sexual abuse survivors joined the lawmakers in demanding that […] 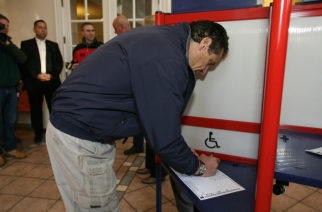 With a final vote on New York’s 2019 budget expected by the end of this week, proponents of early voting are making a final push to ensure funding for the measure. Ahead of the budget vote, the “Let NY Vote Coalition,” a public watchdog group comprised of more than 30 […] 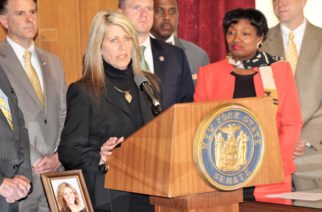 The Senate passed “Laree’s Law” on March 21 aimed at giving police and prosecutors the ability to charge mid- and high-level drug dealers with homicide if their product results in a person’s death. The bill (S.2761), sponsored by Sen. George Amedore, R-Rotterdam, would allow police to charge a drug dealer […] 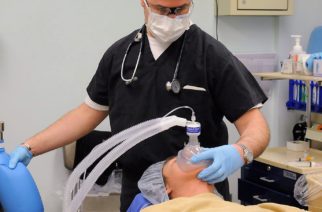 Nurse anesthetists hope to expand their scope of practice, under budget bill

The budget proposal includes a provision to amend the Education Law, recognizing Certified Registered Nurse Anesthetists as Advanced Practice Nurses, which would allow them to expand their role in health care settings across the state. Modeled in part after the Nurse Practitioner Modernization Act of 2014, similar education policy has […] 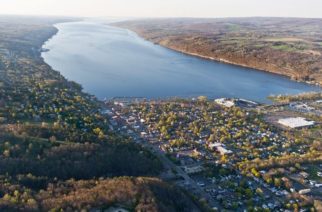 To the editor: The insertion of New York’s largest trash incinerator in the Finger Lakes will disrupt the economy and have detrimental effects on the environment in the region. Circular enerG is attempting to silence the Finger Lakes residents by ignoring their opposition to the trash burning facility and instead […]